S.T.A.R. Flight was a book I read as a teenager. I remembered liking it but did not recall any of the details.

Earth is suffering from overpopulation when the Kaltich arrive. They offer us immortality and star travel if we supply them with some of our natural resources. Now, it is years later and the only way to receive immortality is to pay for it. The Kaltich continue to take our materials but we are no closer the stars. S.T.A.R.(Secret Terran Armed Resistance) forms to change the balance of power. Martin Preston is recruited to slip through the Kaltich stargate, steal their technology, and bring it back to Earth.

E. C. Tubb wrote a book about a very interesting secret. The secret of the Kaltich managed to suprise me the first time I read the book. With this re-reading I still enjoyed this short novel enough though I remembered the solution. Tubb does a good job of showing how Earth has deteriorated over the years. The space program was in development but had not produced a ship capable of taking mankind to the stars, let alone find a planet that could be set up as a colony. The arrival of the Kaltich seemed like a miracle.

The Kaltich, and this book in general, is a thematic ancestor to the television series "V". The visitors offer to extend our life span, cure diseases, and take us to the stars. All they ask for in exchange is the use of some of our natural resources. Of course things are never what they appear to be. The plot of the book revolves around a team of resistance fighters who try to infiltrate the Kaltich and discover their secrets. The more I think about this book, it seems like the plot of "V" was taken straight out of this novel. The secret of the Kaltich is definitely different from the secret of the Visitors in "V". If you are enjoying the television series, and I do like it, then I would recommend reading this book.
Posted by Jim Black at 11:54 PM 1 comment:

Welcome to the first of my newly revived Short Story Sunday posts. This was inspired by Carl at Stainless Steel Droppings. Carl has been doing Short Story Sunday's for quite some time. In my version, I will review the short stories that I have read in the past week.

Let's take a look at the two stories I read.

"Misquoting the Star" was the cover story for the December 2008 issue of Analog. The image I included does not do justice to the David Hardy cover.

It tells the story of what happens when an asteroid crashes into the Earth. Bartell writes about the issues faced by refugees on the moon. His characterization is very good. When the refugees are selected they are put through a very thorough screening process to prevent diseases from infecting the colony. When one of the leaders finds out that one of the crew is not who they thought he was, problems begin. A father goes through the testing then switches places with his son. The son would not have passed the health screening. The leader falls for the son. The conflict of how to handle the crewman is the basis of this interesting tale.

Baxter is one of the author's I had not tried yet. Based on this story, I will be reading more of his works.

From Wikipedia...
The story follows Raida, a young woman on a hunting expedition, who is teamed with her mother's old partner, L'Eesh. The two are investigating a large jovian planet for the presence of rare aliens known as Ghosts when their spacecraft is attacked and they crash land on one of the planet's moons. As they walk to the artificially constructed bridge that connects the two moons, Raida learns more about Ghosts, her mother and how much she can trust her partner.

Baxter describes an amazing environment for this story. I was very impressed to read about this world and the conflict that is taking place between the Ghosts and the humans. The conflict between the two hunters is interesting. The only shortcoming in this story was the mystery of who killed Raida's mother. Baxter leads the reader to think there will be a sequel to this story. It was aggravating to read this without knowing for sure.

1. The Caves of Steel by Isaac Asimov
Posted by Jim Black at 11:13 PM No comments:

I am going for the Obsessed level.
Read 24 speculative fiction books. 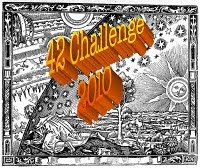 The Caves of Steel by Isaac Asimov

Isaac Asimov. The name reminds me why I love science fiction. The original Foundation Trilogy helped make me a life long fan. I did not notice that the stories did not feature much action. What it did feature was fascinating dialogue and ideas I had never heard of before reading them. That was when I discovered this book that sounded more like a mystery. Now was the right time to return to this classic.

Earth has become a planet of people who do not leave the cities. Everyone suffers from agoraphobia. Asimov was agoraphobic so it was natural for him to write a story about it. The Spacer worlds (colonies of Earth) set up Spacetown. When the Spacer ambassador is killed, Elijah Baley is assigned to the case. What he does not expect is the Spacer detective who becomes his partner. R. Daneel Olivaw is a human form robot. The problem is that robots are not accepted on Earth. The duo becomes one of science fiction's classic teams.

The biggest problem they face is no weapons are allowed in Spacetown. No murder weapon is found but the victim was killed by a blaster. The only way a blaster could be smuggled in was by crossing an open area. No human could do it. Robots are not able to allow humans to be harmed so they could not cross the open area and kill a person.

Asimov managed to convince me that Elijah solved the crime a couple of times before he actually solved it. This is the sign of a good mystery. Even though I read the book 30+ years ago, I was still surprised by the revelation.

The Caves of Steel is still relevant today. Overpopulation is a major problem. Cities are growing out of control. The average person is struggling to get by. People are afraid of loosing their jobs to automation. The thought of living your whole life inside a city, inside the caves of steel, would be depressing to most people of our time. Sunlight and getting outside helps perk us up when things get depressed. I could not imagine living in this world. Everyone eats at community kitchens that serve the same food to everyone. We are a society that loves variety and personal choices when it comes to food.

The Caves of Steel remains one of my favorites. If you have not read it, give it a chance. I think you will like it.

After reading Adam’s (Visions of Paradise) post on writers he would like to read more of, I was inspired to start doing my own annual post on the subject.

1. Isaac Asimov – the good doctor has always been one of my favorite authors. I decided to start re-reading his future history starting with “The Caves of Steel”. More will follow on a regular basis.
2. Gerard F. Conway – I loved his book “Mindship” when I first read it 30 years ago. Recently, I found a copy of “The Midnight Dancers”. It is next on my to be read stack.
3. Poul Anderson – last year I was impressed with “The Enemy Stars”. I have enjoyed many of his books over the years. This year I am targeting “World Without Stars”, “Day of Their Return”, and “People of the Wind”.
4. Arsen Darnay – Darnay was a regular in Jim Baen’s Galaxy magazine in the 70s. He was one that I forgot about. While reading Mike Ashley’s “Gateways to Forever” I saw his name and wondered how his stories would hold up. “A Hostage for Hinterland” is on my list for 2010.
5. Philip K. Dick – in 2009 I picked up a big stack of PKD books. I have not narrowed it down yet but I plan on reading a few of his this year. PKD is a very interesting author and his books are usually different from any others.
6. James Morrow – one of those authors I have never tried. On my 2010 list is “This is the Way the World Ends”. The reviews I have read sound like this is a soul searching morality play.
7. Robert Silverberg – I am way behind on reading his novels. The first one I will be reading this year is “Tower of Glass”. I hope to get to “Nightwings” and “Hawksbill Station”. I liked “Hawksbill Station” when the shorter version was published so I am curious how the longer version compares to it.
8. Roger Zelazny – another old favorite of mine. The first of his I plan to re-read this year is “Doorways in the Sand”. From what I remember, this one is different than his other books. It was a fun story.
9. Alastair Reynolds – I have been promising to read one of his novels for some time now. This year I will do it. I do like his short stories. I am thinking about reading “The Prefect” first.
10. James White – “Hospital Station” was recommended by a friend. I picked up a copy through Paperback Swap. This series looks different enough that it should stand out from the standard SF series.
11. Mike Resnick – I read and liked “Walpurgis III” last year. I have not determined which of his books will be on this year’s list.
12. Robert Charles Wilson – “The Chronoliths” was one of my favorites from last year. Definitely more will be read this year. I am leaning towards “The Divide” and “Spin”.

Other authors on my radar that I hope to get to include George O. Smith, Stephen Tall, H. G. Wells, A. and B. Strugatsky, Jack Williamson, Robert Sawyer, Kay Kenyon, Frank Herbert, Paul McAuley, Iain Banks and Ben Bova.
My goal for the end of 2010 is to post my 100th book review. I realize this is unrealistic but it is something to shoot for. To date I have posted 18 book reviews with 3 more appearing shortly. I am allowing more reading time per day to get back on track. It will be a fun journey.
Posted by Jim Black at 1:24 AM 4 comments: