"The Second Kind of Loneliness" by George R. R. Martin 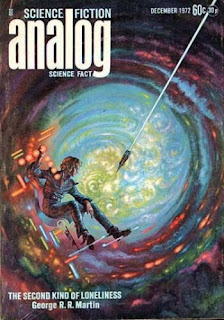 “The Second Kind of Loneliness” is one of my all-time favorite short stories. The author chose to tell the story in the form of diary entries. While I would not want to see this used on a regular basis, it was the right choice for this tale.

Martin’s classic is about the solitary man who works on a stargate station.  His job is to activate the gate and help ships navigate through it. Long spells between ships can make for lonely times. When the ship that is supposed to take him home does not show up on time, the operator starts to panic.

The story showcases the emotions and thoughts of the operator with skill. It reminds me of the tales of lighthouse keepers in the days of the sailing ships.  Martin pulled me into the mindset of the protagonist. I started to feel the same concerns as the main character. I think it helped that I read this while sitting on a beach when my wife and I were in Delaware. We were there in September and the beach was relatively empty.  Looking out at the ocean with few people around helped me sympathize with the protagonist.

If I had to compare this to a similar story I would suggest “Flowers for Algernon”.  The two stories are very different but both authors create similar emotions.

Highly recommended.
Posted by Jim Black at 10:31 PM No comments: