Looking ahead to 2013, two of my favorite "non challenges" are coming up fast. 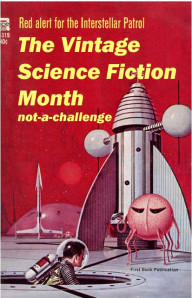 Once again, Little Red Reviewer is hosting "The Vintage Science Fiction Not a Challenge".  Any science fiction that appeared before 1979 is eligible.  It runs for the month of January. 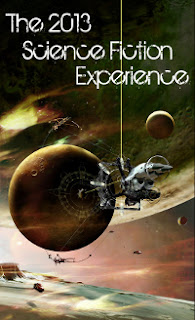 Meanwhile over at Stainless Steel Droppings, Carl is coordinating "The 2013 Science Fiction Experience".  Since it goes for January and February, it overlaps with the Vintage Not a Challenge.

The first books I will be reviewing are:

I will also be participating in the "Dragonflight" readalong.

Other challenges will be added during the year.

In 2012, I only read and reviewed 14 books.  During my teen years, it was not unusual for me to read three to four books a week.  For 2013, I set a goal or reading and reviewing 50 books.  Based on my reading levels of the past few years, this looks like an impossible goal.  But if you don't set the bar high you never know what you are able to accomplish.

I will also be tracking my short story reading this year.  My goal for this year is to read a minimum of 52 stories.

In recent years I have got in the habit of watching television shows that are okay just because the television is on.  I have gone back to reading even when others in the house are watching shows.  I do plan on continuing to watch shows that I like (Doctor Who) or always wanted to see (Fringe).  I now have the first four seasons of "Fringe".  It is a show that one of my best friends (Terry) raves about.  He also gave me "Lost Girl Season 1" and both seasons of the old "War of the Worlds".  At some point, I plan on returning to my re-watch of "Star Trek:  Deep Space Nine" and my first time viewing of "Farscape".

As far as graphic novels go, I have the following ones ready to read:

Based on this list, I had best get back to reading.

The Courts of Chaos by Roger Zelazny 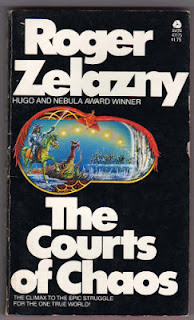 In the climactic finale of The Corwin Saga of The Chronicles of Amber, the man clad in black with a silver rose at his throat takes it upon himself to draw a new pattern, so that there may yet be order in the universe, regardless of the outcome of the war between Chaos and Amber. In order to do this, he will have to travel with the Jewel of Judgment beyond the bounds of order and chaos, to a no man's land where the coming storm will not be able to harm him. But many forces are out to thwart his mission, including his brother, the traitorous sorcerer Brand. 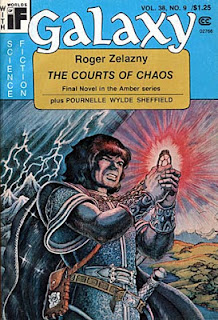 My heart would always race when I received a new issue of Galaxy Science Fiction and the cover featured a new Amber story by Roger Zelazny.  The November 1977 issue showcased a cover by Wendy Pini.  Corwin is staring at the Jewel of Judgement.  In the background we see a storm rapidly approaching while in front of Corwin is a more pastoral land.  And the story never slows down after this point. 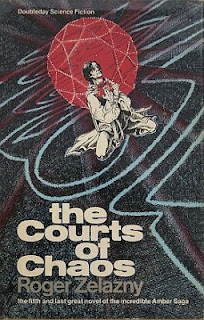 This one has it all.  People live, people die, worlds are born, all of reality is threatened with destruction, secrets are revealed.  Everything I wanted in a story was packed into this series.  Including the basis for the next five book arc.  Unfortunately, Zelazny was planning to write a third arc for the series when he died.  A few short stories appeared but we will never find out what he had planned for the rest of the series.

The Chronicles of Amber receive my highest recommendation.  I know I will return for my fifth reading in a few years.
Posted by Jim Black at 5:00 AM No comments: 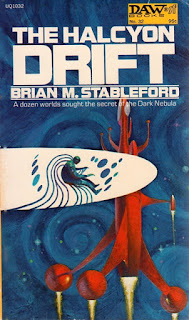 The series is the story of star pilot Grainger, who is forced by circumstances, after his own ship is destroyed in a disastrous crash, to accept a job flying a new ship, the Hooded Swan, that is a fusion of human and alien technologies. She is faster and more manoeuvrable than any previous design, but despite the opportunity offered, Grainger resents the fact he is employed simply as a pilot but denied the position of Captain, and cannot resign at any time during his two-year contract without dire financial penalties that he regards as thoroughly unjust. In fact Grainger regards his terms of employment as making him little more than a slave, or at least an indentured servant. However, left little alternative by his financial situation, Grainger takes the job, and carries out a variety of assignments for his new masters, accompanied by the unwelcome alien symbiote sharing his brain.

My first exposure to Stableford's writing was his short story "An Offer of Oblivion" that appeared in Amazing Science Fiction.  It is part of a loosely connected series that is followed by the very good "Captain Fagan Died Alone" from "The DAW Science Fiction Reader".  They are worth looking up.  After I enjoyed his short story I went in search of his novels.  In the 70s, i was limited to what was in the library and new books on the newstands in our small town.  That is when i first found the last two books of this series ("The Hooded Swan").  The final two books were some of my favorites from that era.

Now I am going back and reading the series from the beginning.  I found this first story a disappointment.  Stableford violates one of the rules of writing.  He spends much of the early part telling us about events instead of showing them to us.  The elements of a good novel are all there but the execution undercuts the effectiveness of the story.  Based on my memories of the later books, I think this is just a temporary problem that the author corrects with future books.  I will find out when I read book two ("Rhapsody in Black").
Posted by Jim Black at 5:00 AM 1 comment:

The Hand of Oberon by Roger Zelazny 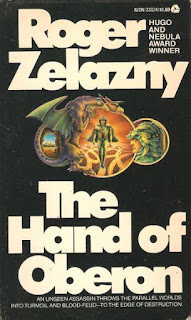 Book four of The Chronicles of Amber features Corwin on a trip to the true Amber.  He discovers the source of the Black Road and finds out what it will take to repair it.  He also determines that his father (Oberon) is still a master strategist.  His hand is guiding the pieces into place for the final battle.  The final page had a big revelation that had me anxious to read the next book when I first read it.

Rick Sternbach supplied the cover to the May 1976 of Galaxy Science Fiction that featured part 1 (of 3) of the serial.  One of the many reasons I loved Jim Baen's time as editor of Galaxy was because he published "Sign of the Unicorn", "The Hand of Oberon", and "The Courts of Chaos".  This is not the kind of story you would expect Sternbach to draw the cover for but it is a fascinating different type of cover for him. 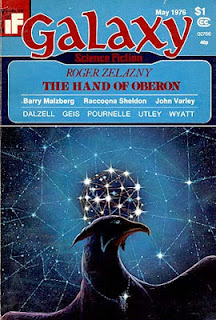 The first five books of the original Amber series remains one of my favorite series.  It is hard to discuss events from this book without revealing too much.

The author appears as "Roger" a pipe smoking guard in the dungeons of Amber.  The guard is writing "philosophical romance shot through with elements of horror and morbidity."  This is fitting since one of the main themes is the true nature of reality.

All I will say is that Zelazny plays fair with the big final revelation.  When re-reading the series you can see where he planted the clues to this one.  Like all good mystery writers, he gave the reader a chance to solve the puzzle.

Anyone who likes fantasy epics, parallel worlds, hard boiled main characters, and great mysteries will love this series.  I can not recommend the first five books too highly.  The second five are still good but are a step down from the original five. 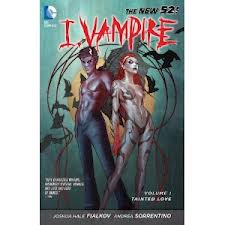 As a sign of my age, I have to admit that I remember picking up J. M. DeMatteis’ original stories of I, Vampire.  It ran as a series of short stories in the old “House of Mystery” title in the seventies.  Marvel Comics had the excellent “Tomb of Dracula” by Marv Wolfman and Gene Colan.  DeMatteis came up with a new vampire series that featured original characters.  Although it did not live up to the Wolfman/Colan classic, “I, Vampire” was a good series in its own right.  I had my doubts as to how good the new series would be.  They were laid to rest when I read a creator owned book by the same author (Joshua Fialkov).

Fialkov is rapidly climbing my list of favorite current comic book writers.  He kept the same basic idea for the basis of the series.  Andrew, a vampire, opposes the other vampires.  He wants to live in peace with the humans.  His lover, Mary also becomes a vampire but she embraces the dark side of the curse.  Over the ages she has taken the name Mary, Queen of Blood.  The two have been locked in a love/hate relationship.  Mary wants to take over the world.  Andrew goes after her forces and tries to destroy them.

In this first story line, the battle makes its way to Gotham City.  Guess who becomes involved?  Of the DC superheroes, Batman is one of the better fits for this series.  The mood and atmosphere seems perfect for Batman.  As the story ends, an even bigger threat emerges…

The combination of excellent characterization and story telling by Fialkov and the moody art of Sorrentino make for a very interesting book.