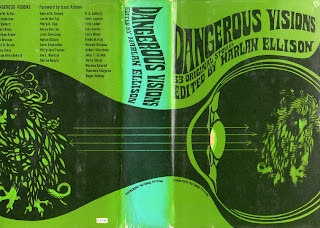 From Wikipedia:  An auto-da-fe was the ritual of public penance of comdemned heretics by the Spanish Inquisition.  The most common form was burning at the stake.

Zelazny envisions a world where men challenge cars in a futuristic version of bullfighting.  The bullfighter comes back after dying twice to enter the ring for a third round of fights.  How did he return after dying two times?  The author never explains.  Based on the descriptions it sounds like some bionic parts might have been used to repair his body but that is strictly my thought on the subject.  I do not have proof that is what happened.

The ending is when "auto-da-fe" comes into play.

I rate this as middle Zelazny.  It is not one of his best stories but is still very interesting.  I did not feel a connection with the main character.  I think it could have been helped with more pages to flesh him out.

It is no secret that Roger Zelazny is one of my favorite writers.  "Nine Princes in Amber" is one of the most read books in my collection.  So I began an unofficial "Roger Zelazny Project".  My goal is to eventually read (and in most cases re-read) all of his novels and short fiction.  Coming up soon on this site will be reviews of "The Guns of Avalon" and a short story called "The George Business".
I am always on the lookout for Zelazny sites.  One that stood out to me is Zelazny & Amber. As part of my tribute to an author who has given me many hours of reading pleasure, I volunteered to help out on the site.  Starting today I will be writing summaries of his novels.  You can go to the novel page by clicking here.  My first summary is for "Nine Princes in Amber".  I will post a message here as I do more of the summaries.
One of my favorite parts of the site is the "Encounters".  Numerous people has left comments about their experiences with Zelazny.  If you had any interaction with him, please leave a note on the site.
Posted by Jim Black at 11:05 PM 2 comments:

Grasping for the Wind

John Ottinger put out the call for people who would want to do a monthly article for his blog "Grasping for the Wind".  I proposed writing about the interaction between science fiction/fantasy and comic books.  John accepted and I will now be appearing there on the 26th of each month.  If John likes the articles, I will continue for the foreseeable future.  If you like this idea, go to "Grasping for the Wind" and let John know.


Next month's article will focus on Larry Niven's contributions to the Green Lantern mythos.

Doctor Who Season 6 Episode 3: The Curse of the Black Spot

The TARDIS is marooned onboard a 17th-century pirate ship and the Doctor is soon being forced to walk the plank at gunpoint. But things are about to get much, much worse...
Beset by terror and cabin fever, the pirates have numerous superstitious explanations for the appearance of a mysterious Siren. The Doctor has other ideas but as every plan of escape is thwarted, he must win the trust of the implacable Captain Avery and uncover the truth behind the pirates' supernatural fears - and he must work quickly because some of his friends have already fallen under the Siren's spell...
(from the BBC site) 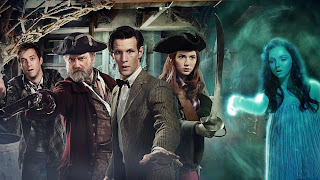 It's time for me to do some catching up.  Another episode has aired since this one appeared.
It is obvious that "The Curse of the Black Spot" was done to help pull in fans of the "Pirates of the Caribbean" movie.  Does that make this a bad episode?  Not necessarily.
Any time a pirate gets cut, a black spot appears on their hand.  Shortly thereafter the Siren manifests and takes the pirate.  When the Doctor and his companions (Amy and Rory) arrives he knows that there has to be a logical explanation.  Rory gets cut and the action kicks into high gear.  Amy goes all out to become a pirate and try to save the boys.  She does a good job with the action sequences. 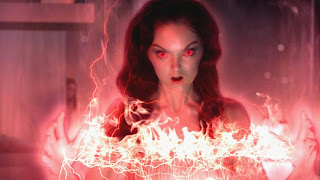 "Curse" is a more traditional straight forward Doctor Who episode.  Some fans will like it more than the two parter that opened the season.  I liked this one but enjoyed the two parter more.  The storytelling in it was challenging and demanded more from the viewer.
Once again the special effects are fantastic for a television series.  This season has featured some of the best effects.
A solid episode that will be followed by "The Doctor's Wife" (the Neil Gaiman scripted story).
Posted by Jim Black at 11:00 AM 3 comments:

I kept hearing great things about this series published by Vertigo.  Since I missed the first few issues, I decided to wait for the paperback collection to appear.  It is a different comic book experience that should not be missed. 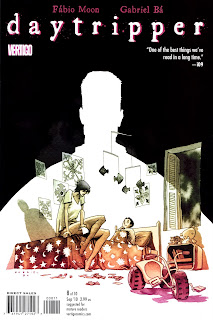 What is "Daytripper" about?  It is the story of one man's life.  At various times it focuses on his relations with his father, his best friend, his wife, and his son.  It definitely is a story about the impact of loss and death on a person.  Somehow the creators take all of this and make it a celebration of life.  Just like in real life, the main character's life accumulates and combines all of the losses and gains we experience to make a whole person.  After reading this book, you will be made to think about the relationships you have in your life.  Appreciate them while you have the opportunity.  As this story shows, your chances to interact with others are limited.  Life and death intervenes when we least expect it. 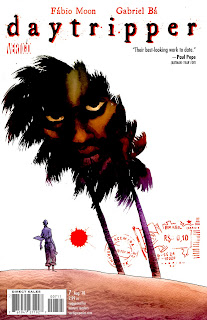 In some respects it is a magic realism story, in others it seems like a day in the life story about a writer, and at times I can see the influence of the themes of Philip K. Dick.


When I read the first issue (or chapter if you are reading the collection) it seemed like a biographical story.  It was very well written with art that supported the story with excellent graphics.  This story could take place in the real world.


Then the second issue puzzled me by showing a character who died in the first story.  How did this happen?  It was not even addressed.  Chapter two told a different biographical story.


This pattern was continued until the later issues when some magic realism was introduced.  The dream sequences were naturally into the over all story.


Somewhere around chapter 7 I started questioning what was real for the main character.  Reality seems to change with each chapter but somehow they all tie together.  This was the Philip K. Dick portion of the story.


It might sound like an unusual mixture but it works.  Congratulations to the creators.  I will definitely be looking for more of their work. 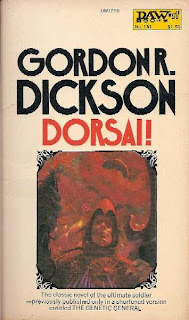 Earlier in the year I reviewed "Act of Creation" (one of the short stories in the Childe Cycle).  Now it's time for the first novel I read in the series many years ago.
Throughout the Fourteen Worlds of humanity, no race is as feared and respected as the Dorsai. The ultimate warriors, they are known for their deadly rages, unbreakable honor, and fierce independence. No man rules the Dorsai, but their mastery of the art of war has made them the most valuable mercenaries in the known universe. Donal Graeme is Dorsai, taller and harder than any ordinary man. But he is different as well, with talents that amaze even his fellow Dorsai. And once he ventures out into the stars, the future will never be the same.
(from Goodreads).
I remember being very impressed with the story of Donal on my first reading. It was one of the first science fiction books I read.  Now I can see problems with this story.
Donal is too perfect.  Dickson writes him as a superman who does not make mistakes.  Battles where his side has no hope are no problem for Donal.  Experienced military men are transparent to him.  He can almost read their minds.  Early in the book, he is led into a trap.  No problem.  It takes very little effort from Donal to save the day and turn the tables on the people behind the trap.
Donal only has one weakness.  He cannot deal with women.  He treats women with contempt.  There is no place in his world for them.
The story gets more interesting towards the end as Dickson reveals more of the philosophy of the series.
Does this mean that I do not like the Childe Cycle?  No.  I remember later books (especially "Soldier, Ask Not") as being very good.  This is an early Dickson novel.  As he hones his skills, he definitely improves.  I will continue to re-read the books in this series.
Posted by Jim Black at 10:47 PM No comments:

Doctor Who Season 6 Episode 2: Day of the Moon

The Doctor is locked in the perfect prison. Amy, Rory and River Song are being hunted across America by the FBI. Terrifyingly powerful aliens have invaded Earth. And it's about to get much, much worse.
In the stunning conclusion to the adventure that began with The Impossible Astronaut, the Doctor must mount a revolution to drive out the Silence. But he's got help in the form of President Nixon... and Neil Armstrong's foot.
(From the BBC site) 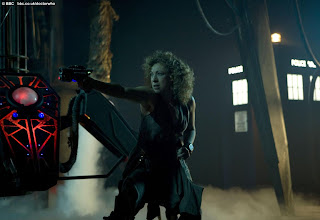 As much as I liked the season opener, this episode was even better.  It contained the trademark horror that Steven Moffat has become known for.
The Silence are fantastic, seemingly unbeatable enemies.  Like the Weeping Angels (another Moffat creation) are most deadly when you don't look at them.  As soon as you take your eyes off of them, your memory of seeing them is erased.  One of my favorite sequences in this episode is when Amy finds the Silence hanging like bats from the ceiling of the orphanage.
The Doctor's plan for defeating the Silence is a stroke of genius.  I did not see that one until he reveals it at the end.
The Doctor's final conversation with Richard Nixon is great.  The David Frost comment was a classic.
Even though Amy says that Rory is her true love, the way she looks at the Doctor seem to tell a different story.  Only time will tell. 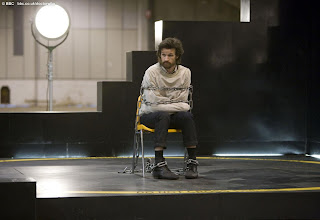 The prison built for the Doctor parallels the trap used in the season ending two parter from last year.  I think this was Moffat's way of telling us that things were not the way they appeared.
Based on the very short flashbacks the Doctor saw, it looks like the Silence were first hinted at in three different episodes from last year.  Leave it to Moffat to have plot lines crossing various seasons.
One of the most jaw dropping moments was the final scene in the alley.  Someone besides the Doctor is regenerating.  I can't wait to see how Moffat develops this story.  He definitely has me hooked on this season.
If you are not watching this show you need to start.  At least go back and watch the previous Moffat episodes and join the Doctor for an amazing ride this year.
Posted by Jim Black at 11:00 PM 1 comment: