For a short time, I had a comic book review blog "Comic Book Focus".  In a tribute to that site, it will be used as the name of a feature on "Science Fiction Times".  The focus will be on short reviews of individual issues. 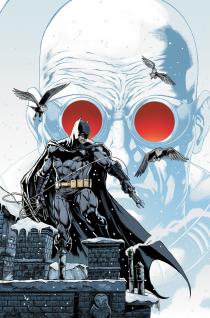 
Annuals used to be one shot summer blockbusters.  Sometimes the events of it would carryover into the regular title but you could read it as a one and done story.  DC seems to be returning to that format with this issue. 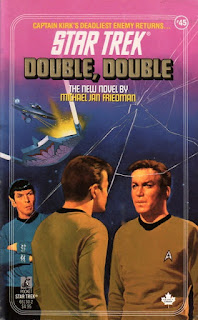 On a routine exploratory mission, the Starship U.S.S. Hood picks up a distress signal from a research expedition thought lost long ago-the expedition of Dr. Roger Korby, one of the centuries’ greatest scientific minds.  Korby himself is dead, it seems, but his colleagues have made a most incredible discovery.  A discovery they insist the Hood’s captain sees for himself.  Reluctantly, the captain agrees to beam down.

Meanwhile the crew of the U.S.S. Enterprise begins a long overdue shore leave on Tranquility Seven.  James T. Kirk is looking forward to a few days of rest and relaxation…until what seems like a bizarre case of mistaken identity plunges Kirk into a whirlpool of mayhem and murder and puts an inhuman stranger with his memories in command of the Enterprise.

Have you ever wondered what happened after a television episode?  Michael Jan Friedman shows us the follow up to the original series “What Little Girls Are Made Of”.  It is one of the best of the Trek books I have read.

What Do You Think of When You Hear the Name "Kingpin"?

If you are not familiar with comic books, or at least the Daredevil movie, and you hear “Kingpin” you probably think of the bowling/comedy movie.  While I like that movie, it is not the first thing that pops up when I hear the name.  My memories go further back to my childhood. 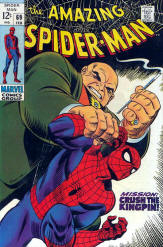 By the time I started picking Spider-Man comics off the spinner rack, and yes I am showing my age, it was the Gerry Conway era.  It was a great time to be a Spider-Man fan.  The only down side was that it only appeared once a month.  Fortunately Marvel was reprinting the old issues in Marvel Tales.  Those reprints were my first experience with the Kingpin.  The storyline I started reading featured a gang war between the Kingpin and Silvermane over a stone tablet.  Why was the tablet worth fighting over? 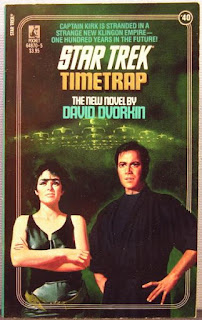 In a remote area of Federation space, the Enterprise picks up an urgent distress signal from a Klingon vessel.  Tracing the signal, the crew finds the Klingon cruiser Mauler trapped in a dimensional storm of unusual power.  Surprisingly the ship refuses both the Enterprise’s call and offers to help.  Determined to discover what the Klingons are doing in Federation space, Kirk beams aboard their ship with a security team just as the storm flares to its highest intensity.  As the Spock and the bridge crew watches in horror, the Mauler vanishes from the Enterprise’s view screen.  And James T. Kirk awakens…one hundred years in the future.


Before reading the Star Trek:  The New Frontier series by Peter David, I thought I would revisit some of the older Star Trek books that I remembered enjoying.  I remembered one of my favorite eras in Trek fiction was during the Pocket Books series numbered in the 40s.  Two of the better ones appeared close together.  One was “Double, Double” by Michael Jan Friedman.  The other was the first one I chose to re-read.  It was a classic original Trek by David Dvorkin.

A new regular feature here will be a look back at some of my favorite covers.  First up will be the covers that Vincent Di Fate did for Lin Carter's Callisto series. 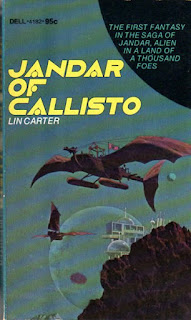 The first book caught my eye due to Di Fate's classic cover.  The combination of the bird like flying machines, futuristic building and the large moon in the background jumped off the book rack and into my hands.  The cover convinced me to buy it. 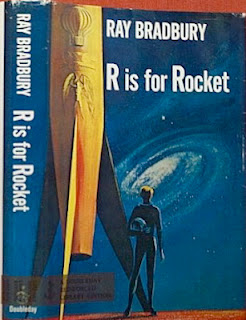 When I read that Ray Bradbury had passed away, it struck home how the face of science fiction has changed since I first started reading it.  When I began reading in the genre, the big writers were Isaac Asimov, Arthur C. Clarke, and Robert Heinlein.  Ray Bradbury was in what I would consider the second tier.  Does that mean he was not as good of a writer as the big three?  No.  He did not make the transition to writing novels that they did.  Most of Bradbury’s output was in the short fiction category.  He was writing very little in the field by the 70s.  I remember reading and enjoying “The Martian Chronicles”, “S is for Space” and “R is for Rocket”.  Why did I read those but not the other collections/novels he wrote?  Because they were in the local library and the second factor was the titles.  I have always leaned towards stories that take place in space or on other planets.  Titles containing words like Martian, Space, and Rocket jumped out at me.  They instantly drew my attention.  That is one of the reasons I read the Winston series with their rocket ship logo.  When you are in junior high school and don’t know much about the field, you have to find something to narrow down the list of what you want to read.