Kress has crafted a fine story here.  The tale of a grandmother and grand daughter in a future world that suffers from the devastating effects of climate change.  Books are evidence of sin because they are made out of wood taken from trees.  This book shows what happens when the grand daughter finds a few books.  She and her grandmother share a special time reading them until...

Kress does a good job of showing the effects of hate.  The bonds of hatred are hard to break.  Sometimes the negative feelings take priority and control people's lives.

The author thought out the effects of a climate disaster.  The rules and lifestyle of the survivors are presented like things have always been this way.

Not a great story but it is a good solid one.
Posted by Jim Black at 1:00 AM 1 comment:

Sometimes you read a short story and just know that it is in a particular magazine.  While reading "Draw" I had to keep double checking the cover to see if I had picked up Analog.  It reminded me of a typical Analog problem solving story.  It is not an insult.  Personally, I enjoy Analog.

"Draw" seems like it was inspired by the old Winston Science Fiction series.  It features a young protagonist in a strange environment.  He is worried that his father will not survive if he waits for the authorities so he takes matters into his own hands.  This is a classic science fiction plot.  The author does a good job with it.  It is not the kind of story that will win awards but it is fun to revisit this style.  I would like to see more stories like this.
Posted by Jim Black at 10:04 PM 3 comments:

Cenotaxis was my first time to read a Sean Williams story.   Some of the reviewers I follow liked this short book so I thought it would be a good one to try.


This story follows Imre Bergamasc's trip to Earth.  He is trying to force Earth to join in the quest to discover the source of the "Slow Wave" that devastated the galactic civilization in an earlier book-Saturn Returns.  To his dismay, he runs into a rebellion led by Jasper, a man who claims to be God.  Jasper does not live his life in a linear fashion.  His future occurs before his past.  While he is not omniscient, he is able to sense events before they happen.


Jasper and the way he lives his life is an interesting character.  Along with Jasper the other fascinating idea is the Apparatus.  It seems to be an A.I. that Imre is trying to track down.


Without having read Saturn Returns, I found this story to be interesting but lacking.  It was hard to connect with the characters.  It was never explained why Earth is so important to Imre's plans.  The other mystery that is never explained is the true nature of Jasper.  Maybe future books will answer these questions but the explanation was not given in this story.


I will have to go back and read the other books and see if this story works better as part of the series.
Posted by Jim Black at 11:08 PM 1 comment:

First off I want to announce a slight change in format for the blog.  Starting this week, I will be posting reviews of short stories during the week.  Sunday's post will be a look back at the stories reviewed during the week. 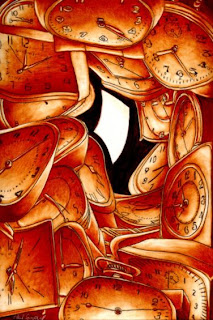 In my continuing quest to try to reduce the list of author's I have never read, I tried Bob Shaw's "Light of Other Days".  Wow.  This is what a science fiction short story should be.  Somehow, in roughly 3,000 words, Shaw has introduced an interesting concept (slow glass), shown the impact on society, and told a touching personal story that is directly the result of the concept.  Shaw has given us the blueprint for a great science fiction story.

I know that slow glass is not a hard science concept.  The idea of glass that can slow light to the point where the image coming through the glass can be years old is a fascinating framework to build a story on.  I will be reading more of Bob Shaw's stories in the future.


The next time someone says that a complete story can not be told in a short space, hand them this story.
Posted by Jim Black at 8:52 PM 2 comments:

Brian Plante has crafted a touching story about a boy whose family moves to Texas. His only escape is watching the Mars channel. It is following the latest ship to Mars. Davy dreams of growing up to be an astronaut. Life is boring until he befriends the beautiful older woman next door. Their friendship and combined with Davy's dreams make for compelling reading. The author has tapped into the desire to be an astronaut that is experienced by many young people when they read science fiction. Most readers can remember back to their younger days when they had a crush on a grown up. The ending takes your emotions on a roller coaster ride. The best compliment I can give it is that Davy seems like a real person. Recommended.
2.  "The Island of Doctor Death and Other Stories" by Gene Wolfe
First printing:Orbit #7, 1970
A young boy, Tackman "Tackie" Babcock lives with his divorced mother.  Her boyfriend buys him a book called "The Island of Doctor Death and Other Stories".  As they prepare for a costume party the characters from the book start appearing and talking to Tackie.  The characters tip off Tackie about what is really going on in the house.
I will not reveal any more of the plot because I don't want to ruin the story for anyone who has not read it yet.  Wolfe uses a pulp story to help the boy understand the real world.  What is real in the story?  Like many of Wolfe's stories, it is open to interpretation.  I found this to be a fascinating, initially confusing, story that is well worth the effort.  Track this one down and read it.  If you like stories that spell out everything, avoid this one.  On the other hand, if you like challenging stories that make you think, this tale is highly recommended.
Posted by Jim Black at 12:24 AM 3 comments: 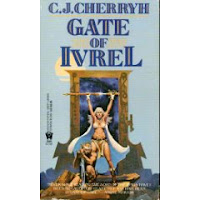 Re-reading this book falls under revisiting my early years of science fiction and fantasy reading. This book hooked me on C. J. Cherryh back when I was 15 years old. So I thought it would be fun to go back and see how it holds up.

The gates were scattered throughout time and space by a vanished alien race. When someone used the gates to travel backwards in time, disaster occurred. The last remaining members of the race takes on a mission to close the gates. It is a one way mission. Morgaine is one of the alien's assigned to close the gates. On her journey to Ivrel, she teams up with a native named Vayne. Everywhere they go, disaster follows. In spite of everything, Vayne is committed to following Morgaine.

I enjoy a good science fantasy story. Writers like Andre Norton, C. L. Moore, Leigh Brackett, Roger Zelazny, and Mark Geston (with the ultimate war between science and magic-Siege of Wonder) have given me many hours of reading pleasure. At the time, I was captivated by this book. Now it is a different experience.

This is, I believe, Cherryh's first book and it shows. The language is very convoluted. It is a struggle to read the sentences in this story. I believe this sold on the strength of the story. The idea is interesting. I can see where Cherryh showed signs of promise based on her ideas. Unfortunately her sentence building was not equal to her ideas.

I would pass on this one unless you are a devote Cherryh fan.