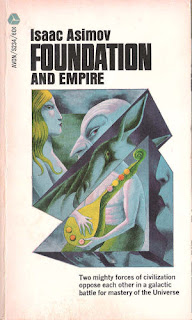 I am behind schedule for the first section of the group read of “Foundation and Empire”.  Hopefully, I will be able to finish the book this week and be ready for the Sunday posting that wraps up this read.  Please take the time to read the rest of the groups comments.  I will be leaving comments on their sites this week.
Read more »
Posted by Jim Black at 10:13 PM No comments:

What do you get if you cross Silverberg's Hawksbill Station with the Wild West? 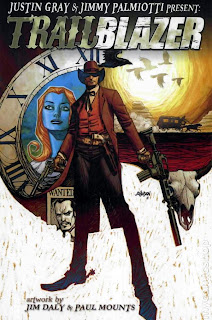 Justin Gray and Jimmy Palmiotti have made a name for themselves on DC’s Jonah Hex title (now called All-Star Western).  Their brand of hard hitting, pulp style westerns is perfect for that book.  The way the duo are able to write stories filled with great characterization and fast paced plots that tell a complete story in one issue is amazing.  Because of their work on Jonah Hex, I could not wait to read this one shot from Image.

A Story with 18 Writers

In 1932, the first fanzine devoted to science fiction debuted.  Four editors, 3 were 15-17 years old, started "The Time Traveller".  Mort Weisinger and Julius Swartz would become science fiction agents and later editors for DC Comics.  Forrest J. Ackerman went on to a long career with "Famous Monsters", "Perry Rhodan", and others.  Allen Glasser is the one that I am not familiar with.  Later, the fanzine would become "The Science Fiction Digest" and "Fantasy Magazine".


One of the stunts the magazines used to do was the round robin story.    When I was recently on the Sony Ereader site, I spotted a novelette with multiple authors.  It turned out to be one that the editor of a magazine had commissioned.  It consisted of 5 chapters, each written by a different author.  The authors of “The Covenent” consisted of Poul Anderson, Isaac Asimov, Robert Sheckley, Murray Leinster, and Robert Bloch.  There was a certain appeal to doing this type of story.  How would Robert Bloch finish a story begun by Poul Anderson?  Would the difference in writing styles ruin the experience for the reader?  I am sure it depended on the story.  “Cosmos” was a classic pulp story.  Just by looking at the chapter titles, you can tell that it will be a fast paced story.  Anyone who likes exciting fast paced storytelling with space battles, alien armadas, and planets destroyed as only Edmond Hamilton can do should make the effort to track down this serial.  Today, each of these chapters would be a novel that would be 500-700 pages long.  The way Palmer plotted this story, the author had to keep moving or they would get run over.

A Fellow Citizen of the Galaxy

Robert “Bob” Sabella.  The first time I saw the name was in Richard Geis’ classic fanzine “Science Fiction Review”.  Bob was one of the regular reviewers.  At the time, he was one of the few contributors who was not a professional science fiction writer.   Unfortunately, “Science Fiction Review” came to an end and Bob’s name disappeared from my world. 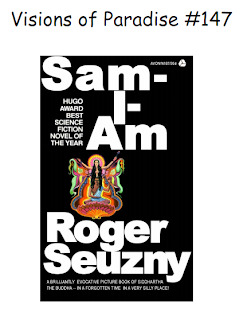 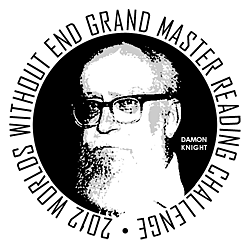 Okay,  Carl has done it again.  He keeps finding more challenges that I can't resist.  Worlds Without End is hosting a reading challenge where you read one book each from 12 different grand masters.  Stop over and check it out.  It will be fun reading books by classic authors.

The Foundation Group Read Part 2 of 2 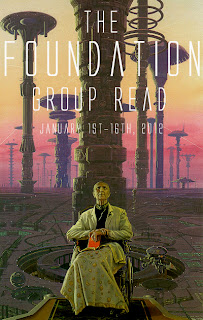 So the great "Foundation" Group Read, hosted by Carl at Stainless Steel Droppings, has come to an end.  It was fun getting to revisit one of my favorite classics.  Carl has decided to keep the Asimov Group Read going by continuing on with "Foundation&Empire" and "Second Foundation". 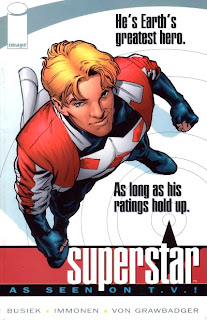 Writer:  Kurt Busiek
Penciller:  Stuart Immonen
Inker:  Wade Von Grawbadger
For a short time, some writers and artists banded together to create the Gorilla Comics line.  Among the creators were Mark Waid, Barry Kitson, Kurt Busiek, Stuart Immomen, Karl Kessel, and others.  I really liked what they produced.  Unfortunately, due to various circumstances, it did not last.  One of the titles that I missed was Superstar:  As Seen on TV by Busiek and Immomen.  Their Shockrockets was a great title that I enjoyed.
Read more »
Posted by Jim Black at 12:07 AM No comments: 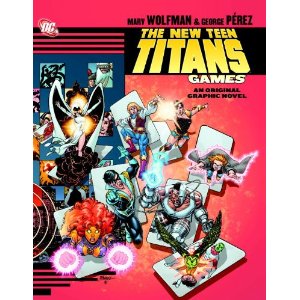 
How many times do you hear comments like “this (fill in the name) was decades in the making”?  In this instance, it is true.  Many years ago, Marv Wolfman and George Perez rebooted a cancelled title called the Teen Titans.  The outstanding combination of writing and art took the title all of the way to the top.  Fans debated whether Teen Titans or the X-Men were the better title.  At the time, Chris Claremont and John Byrne were on their legendary run on X-Men.  Which title was better?  For me it depended on which one I was reading when asked the question.

We all have guilty pleasures.  Some people hide them.  Me, I put it out there to show others that every book is liked by someone.  But I am getting ahead of myself.  Let's go back to the early days of my life long love affair with science fiction... 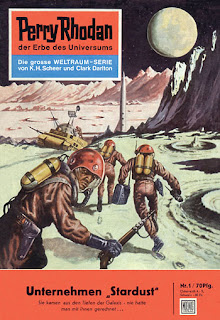 When I first got the science fiction bug, I was picking up every book I could find that looked even remotely like it belonged in the genre.  Some of the books were from the library.  Others were ones I bought in stores.  One of the malls we visited had a J. C. Penney's store.  If you go to one today, you won't find any book shelves.  At that time, at least in our store, they had a few racks of books. And one of the sections was devoted to science fiction.  This is where my first copies of the original Foundation trilogy came from.

Welcome to part one of the Foundation group read being hosted by Carl of Stainless Steel Droppings.  Click here to see what the others have to say about Foundation.  This is the cover of my first copy of Foundation. 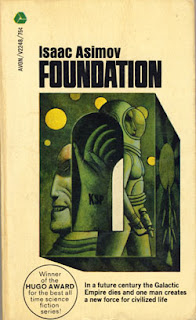 I will be participating in the Speculative Fiction Challenge 2012 at the "In Nirvana" level. 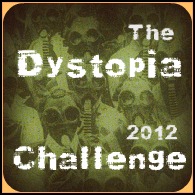 The Dystopia 2012 Challenge includes all forms of future disaster stories (post apocalypse, ecotopia, etc).  It can be short stories, novels, or graphic novels.  My reads will be posted on this page. 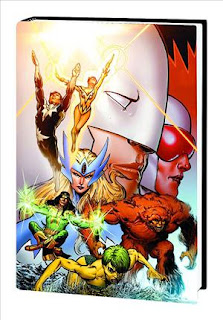 During "The Chaos War" crossover, the dead members of Alpha Flight returned to life.  Alpha Flight is reunited as Canada's super team.  When the "Fear Itself" event hits Canada's shores, the people panic and turn to the newly elected Prime Minister Cody for guidance.  Cody turns the people against Alpha Flight.  One of their own betray them and label the team as traitors.  Can Alpha Flight survive when their nation is hunting them down?

Pak and Van Lente have crafted a very interesting story.  Every time it seems like Alpha Flight is making progress, they hit them with a new twist.

Eaglesham is one of my favorite pencillers in the business today.  He embraces traditional comic art and takes it to a new level.  It has been fun watching him progress from his work on Batman and Justice Society through the Fantastic Four and this title.  I look forward to his next project.

The only downside to this is that the series was cancelled with the eighth issue.  Pick up this collection and the following one.  It is a fun super hero title that deserved more attention. 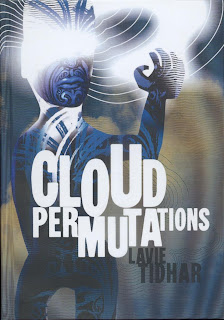 From the author's website...The world of Heven was populated, centuries ago, by Melanesian settlers from distant Earth. It is a peaceful, quiet world – yet it harbours ancient secrets.

Kai just wants to fly. But flying is the one thing forbidden on Heven – a world dominated by the mysterious, ever present clouds in the skies. What do they hide? For Kai, finding the answer might mean his death – but how far will you go to realise your dreams?
Set against the breathtaking vista of a world filled with mystery and magic, Cloud Permutations is a planetary romance with a unique South Pacific flavour, filled with mythic monsters, ancient alien artefacts, floating islands and a quest to find a legendary tower… whatever the cost.
"Cloud Permutations" lives up to the hype.  I found myself caught up in the world from the start.  It is a short book so it does not take long to read.  "Planetary romance" is a classic form in science fiction.  It describes a rousing adventure on another world.  One of the old school authors of this genre was Leigh Brackett with her Eric John Stark adventures.  I hope to read and review some of her work later this year.  Tidhar does a solid job of settling up the mystery.  You won't want to put this down once you start reading it. 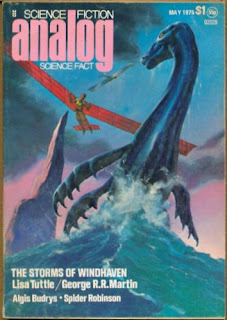 While reading this story, I was taken back to 1976 and an issue of Analog that came in the mail.  That issue featured a novella by George R. R. Martin and Lisa Tuttle that was called "The Storms of Windhaven".  It was later expanded into a novel.  The combination of Martin and Tuttle's styles hooked me with the first page.  Both stories deal with someone who wants to fly on an alien world.
The two stories are different (Tidhar's stylistically is closer to a Cordwainer Smith tale) but both are excellent.  Maybe more writers need to explore this type of planetary romance.
Highly recommended. 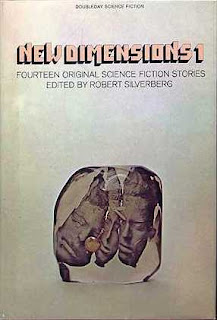 As the new year begins, I decided to start one of my old favorites from my early years of reading-"The Sliced-Crosswise Only-On-Tuesday World" by Philip Jose Farmer.  I remember reading it in Terry Carr's "The Best Science Fiction of the Year #1" in 1976.  Some of my best reading experiences were the various "Best of..." and "World's Best SF" series.  I plan on revisiting some of those this year.

"TSCOOTW" is one of Farmer's classic stories.  The world is suffering from overpopulation.  A scientist discovers a way to put people into suspended animation.  So the government lets the populace be awake for one day a week.  Our protagonist is a Tuesday person.  At the end of the day, he goes into suspended animation until the next Tuesday.  Life is good until the day he sees one of the Wednesday people who lives in his apartment building.  He falls in love at first sight.  As he learns more about he, he continues to become obsessed with meeting her.  This story follows his quest to switch to Wednesday.

After all of these years, I still enjoyed this story.  Highly recommended as a Farmer classic.
Posted by Jim Black at 5:10 PM 3 comments: