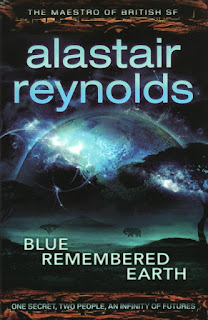 One hundred and fifty years from now, Africa has become the world’s dominant technological and economic power. Crime, war, disease and poverty have been eliminated. The Moon and Mars are settled, and colonies stretch all the way out to the edge of the solar system. And Ocular, the largest scientific instrument in history, is about to make an epochal discovery…

Geoffrey Akinya wants only one thing: to be left in peace, so that he can continue his long-running studies into the elephants of the Amboseli basin. But Geoffrey’s family, who control the vast Akinya business empire, has other plans for him. After the death of his grandmother Eunice—the erstwhile space explorer and entrepreneur—something awkward has come to light on the Moon, so Geoffrey is dispatched there to ensure the family name remains untarnished. But the secrets Eunice died with are about to be revealed—secrets that could change everything...or tear this near utopia apart.

My first Reynolds story was "Great Wall of Mars".  It was a great short story.  I followed it up with "Revelation Space" and it was a fascinating first novel.  So when Reynolds released the first book in a new trilogy ("Poseidon's Children) this year I thought I would follow this one as it was published.  Did it hold up to his previous work?  Yes and no.

The ideas are right up there with the other stories.  The individual scenes on the moon and beyond are amazing.  Unfortunately I was disappointed with the  segments that took place in Africa.  I realize they were important to Geoffrey's character but I thought Reynolds dedicated to this part of the story.    My favorite scenes were the ones on the moon with his sister.  The culture that he develops there is very interesting.

If that was the only drawback I would have liked this story more.  Unfortunately the main, driving plot was pedestrian and disappointed me.  I expected better from Reynolds.    Arthur C. Clarke is one of his inspirations and I have found some of his books to be more of a travel log than a novel.  This suffers from some of the same shortcomings.  Hopefully books two and three will have a better plot.

If you prefer idea driven books, i would recommend this one to you.  If you like plot driven books, I would take a pass on this and pick up one of his other titles. 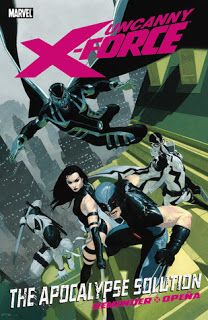 Rick Remender has taken Marvel Comics by storm.  He is a critical success.  So far I have not been as impressed as others have been.  His first work on X-Force is one of his better efforts.  Remender does a solid job with the personalities of the various characters.  I thought he did his best work with Psylocke.  Her personality is dead on.  The plot was inconsistent.  At times he seemed to change direction for no reason.  The main plot was a variation of the old "if you could go back in time and kill Hitler as a baby would you do it?".  The plot twist at the end was handled very well.  Remender is showing some promise but I am still not impressed.

The part that was very impressive the art of Jerome Opena.  Opena stepped up his game and turned in the best work of his career.  If you are a fan of great art, pick up this collection. 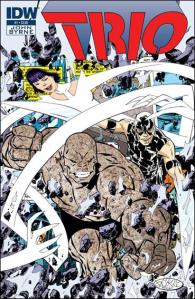 John Byrne's return to super-hero books is a fun look back at the classics he did at Marvel and DC.  Mostly this book will remind the long time reader of his time on Fantastic Four and Danger Unlimited.

The art is done in a very good traditional style.  The buildings and special effects are also done in a classic style.  It depends more on the artists line work than letting the colorist fill it in.

The least interesting part of the art are the main characters.  Rock, Paper, Scissors are the weakest designs in the book.

The story takes a couple of chapters to get the reader to care about the characters.  My favorite of the four chapters is the final one with the villain from the past.

If you want to read a fun old school super hero title, try this one. 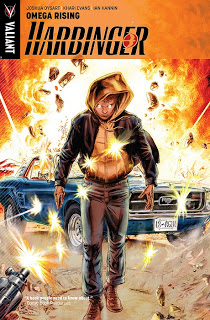 Joshua Dysart is one of the most underrated writers in comics today.  This reboot, as part of the new Valiant Comics, is very good.  Peter Stenchek has  the power to make others do what he wants by his force of mind can be scary.  Dysart shows what can go wrong in the first story.  Many of the characters from the original series are re-introduced here but he is not just copying the original story.  He makes this a similar but new story.  The only fault I had with the first arc was the art in the final chapter.  The artist keeps a consistent style throughout the series until we get to the final battle.  Then he chooses to use a slightly more cartoony style that distracts the reader.  Overall it is a great story that I will definitely be following.

Once we got to Thanksgiving, it started to sink in that I have been reading many things but have not kept up with blogging about them.  During the past week I have been posting many short reviews of graphic novels that I have read. 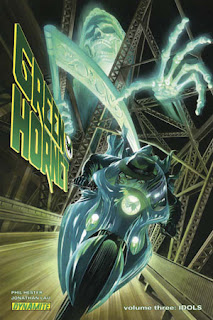 I'll admit it, I love reading an occasional old school pulp adventure.  I have read stories about Doc Savage, the Shadow, the Spider and the Green Hornet. When I was growing up, my only exposure to the Hornet was in the old Adam West Batman show.  The Green Hornet and Kato (played by a young Bruce Lee) guest starred in a story.  They pretend to be criminals to work behind the scenes to stop the other bad guys. The concept was intriguing but I did not hear of them again for many years. 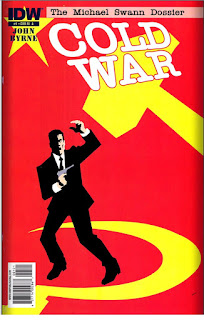 After going to see “Skyfall”, I was in the mood for a spy story.  That was when I remembered buying this John Byrne mini-series.  The main character is a James Bond type who no longer works for MI-6.  But when the organization needs someone to do a job that cannot be traced back to them, he takes the mission.  A scientist is working on a new rocket system but things go wrong when a Russian spy and a possible defection are added to the mix.  Byrne seems to have patterned his character after the Sean Connery/Daniel Craig Bond.  High adventure, desert car races with one of the driver’s replaced by a killer, and a very good final issue that takes place in Russia.  Byrne’s art is a perfect fit for the story.  I am already looking forward to reading the sequel that will be out next year. 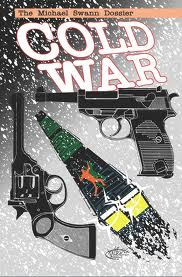 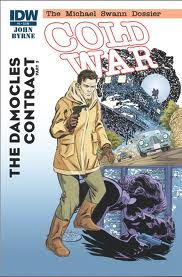 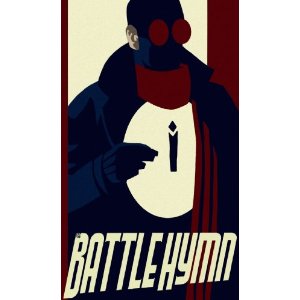 BATTLE HYMN:  Another Image superhero read.  This is a B. Clayton Moore/Jeremy Haun take on the World War II superhero teams (such as The Invaders, All-Star Squadron, The Liberty Legion, and The Freedom Fighters).  My impression is that this is probably closer to reality than the way the story has been presented in many comics.  The closest comparison to this title would be James Robinson and Paul Smith’s class Justice Society series “The Golden Age”.  If you like more realistic takes or the World War II era, pick up this title.  I know I will be looking for more from these creators.
Posted by Jim Black at 10:47 PM No comments: 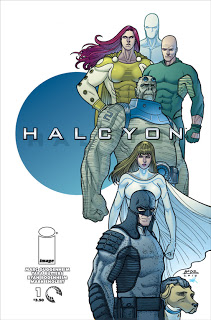 HALCYON:  Mark Guggenheim’s Image title was a very good 5 issue series.  All violent tendencies have disappeared from the world.  Villains turn themselves in.  The heroes know that it was a man-made event but have no clue as to who orchestrated it.  It turns out to be the perfect revenge plan as a villain gets back at a hero.  If you were a Batman style hero and a villain’s master plan had this as a side effect, would you stop him?  Like the villain says, if you stop me you will be responsible for every crime (including murder) that happens from here on out.  What is a hero to do?  This is by far the best writing I have read from this author.  The art is very similar to Frank Quitely’s.  Overall it was a good series that should have received more press. 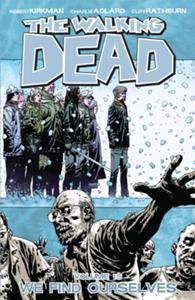 THE WALKING DEAD VOL. 15 (“We Find Ourselves”):  The titles are very reflective of the stories.  This volume collects issues 85-90.  Kirkman keeps the focus within the existing group.  A lot of character development in this volume.  Rick becomes a “man with a plan”.  It seems like Rick is on the path to become a Governor-style leader.  Readers of previous arcs know that this is not a good thing. 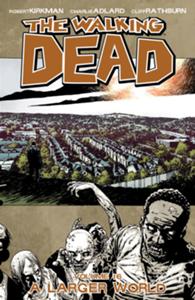 THE WALKING DEAD VOL. 16 (“A Larger World”):  Issues 91-96. The best way to summarize without ruining the story is to say this is the volume where Jesus comes to town.  Rick is either smarter than everyone else or is going for a ride on the paranoid bus.  “A Larger World” is another great collection.  I’m running out of superlatives for Kirkman’s masterpiece.  Let’s just call this one “Rick has a field day”.  He is scaring me more with each story arc. 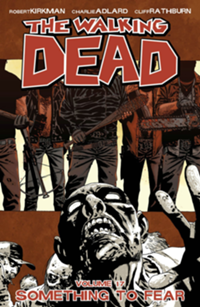 THE WALKING DEAD VOL. 17 (“Something to Fear”):  After reading the first two chapters, I became very curious whether the “Something to Fear” is a group of outsiders or Rick.  Based on the recent arcs, I am starting to think that Carl is a ticking time bomb.  It would be impossible to grow up with what he has lived through and be a “normal” kid.  He is also patterning his behavior on his father’s and that is admittedly not the most stable example.  In the past if you had told me that a zombie comic would be one of my favorites, I would never have believed it.  This was one of the most disturbing arcs in this series.  Readers are in for a treat.  The world and the cast change with the next arc looking like an even more brutal one.  You don’t do what his enemies have done to Rick without suffering through a payback.  And we have seen Rick’s revenge in the past.  The next arc looks like a blood fest as Rick reacts to events in this one.
Posted by Jim Black at 10:33 PM No comments:

I have been reading a ton of books over the last month but did not have time to blog about them so this is the first of many short catch up reviews. 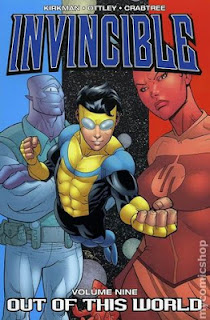 INVINCIBLE VOL. 9 (“Out of This World”):  Issues 42-47.   Invincible flies to the Moon as a “safety net” for a team of astronauts who are setting up a base to be on the lookout for invasion fleets (due to events in previous issues).  He is called back to Earth to fight a new menace until the Guardians of the Globe can arrive, then it is back to the Moon for the rest of the mission.  Kirkman also fits in a press conference, time at college with Invincible’s best friend, a summary of his love life, and time to throw the baseball with his little brother who…I can’t say more without giving away too much.  And that is just in the first issue.  This is a fun superhero series that combines old school plotting with modern characterization.  Kirkman is one of the masters of comic writing.  The more I read the more I am impressed.