As the year winds down I am starting to think ahead to next year and Carl's SF Experience.  To get ready for it, I began reading Asimov's "Buy Jupiter and Other Stories".


"Day of the Hunters" uses an old plot of having one person tell a group a strange story.  Asimov used it in his mystery series "The Black Widowers".  A couple of the more famous science fictional uses of this story structure was Spider Robinson's "Callahan's Bar" series and Larry Niven's "Draco's Tavern".


This time around, Asimov uses it to tell the tale of what happened to the dinosaurs.  A strange man claims to be a time traveler who went back to see what happened and narrowly escaped to the time of the story.


It was a fun story that I recommend to the reader.


Although it is not classic Asimov, this is an amazing story for what the author fits into this short number of pages.  Asimov covers a future Earth, an island city that floats in the sky, a revolt of the lower class, and the results of the revolt.  At the same time, he makes you care for the main character.


Recommended, even though it has a corny ending.


Re-reading Asimov brings back my love for the short story.  I think that more writers need to study Asimov.  I heard in a recent podcast that Kim Stanley Robinson is a big fan of Asimov's and wishes that he would return to prominence in the field.  In recent years, it seems that Asimov is slipping out of the fan's eye.

The Return of Short Story Sunday 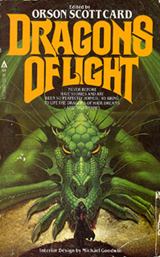 Welcome back to the return of Short Story Sunday.  I have missed reading short fiction so I will try to do at least 1 short story per week.


"The George Business" by Roger Zelazny
First publication was in Orson Scott Card's "Dragons of Light" anthology in 1980.


"The George Business" is an entertaining, very short, work by Zelazny.  A knight and a dragon enter into a mutually beneficial agreement.  To say anything else about the plot would ruin the story.  Zelazny has written many great short works but this is not what I would consider a classic.  Still it is a fun story to read and won't take the reader very long to finish it.  Recommended. 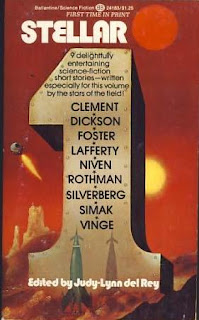 "The Birch Clump Cylinder" by Clifford D. Simak
Clifford D. Simak has written many great science fiction stories beginning in 1931 and continuing through the 1980s (he passed away in 1988).  I remember enjoying his "City" and "Way Station" in my younger days.  In the 1970s, Judy-Lynn del Rey started publishing the "Stellar" series of anthologies as a tribute to Fred Pohl's classic "Star" anthologies. I liked both Pohl's and del Rey's anthologies when I read them in the seventies.  This year I have re-collected the "Stellar" series and began re-reading it to see how it held up to the test of time.
"The Birch Clump Cylinder" was the opening story in the first collection.  It is competently written but seems to be lacking the magic I found in Simak's earlier work.  It had the format of a classic SF story with a strange object appearing and a group trying to determine how it works.  Unfortunately Simak did not put much effort into developing the characters.  Hopefully the rest of the series holds up better.

DMZ Vol. 1: On the Ground by Brian Wood and Riccardo Burchielli

DMZ, Vol. 1: On the Ground by Brian Wood

From Goodreads...
From indie comics icon Brian Wood (Demo, Channel Zero, GLOBAL FREQUENCY) and up-and-coming Italian artist Riccardo Burchielli (John Doe) comes the first volume of DMZ, collecting the first 5 issues of the series about the ultimate embedded war journalist trapped in a most unlikely war zone: the streets of New York City. In the near future, America's worst nightmare has come true. With military adventurism overseas bogging down the Army and National Guard, the U.S. government mistakenly neglects the very real threat of anti-establishment militias scattered across the 50 states. Like a sleeping giant, Middle America rises up and violently pushes its way to the shining seas, coming to a standstill at the line in the sand — Manhattan or, as the world now knows it, the DMZ. Matty Roth, a naïve young man and aspiring photojournalist, lands a dream gig following a veteran war journalist into the heart of the DMZ. Things soon go terribly wrong, and Matty finds himself lost and alone in a world he's only seen on television. There, he is faced with a choice: try to find a way off the island, or make his career with an assignment most journalists would kill for. But can he survive in a war zone long enough to report the truth? Collects issues 1-5.

This is the first time I have read any of Brian Wood's work. It won't be the last.

Wood has mastered how to set up a new series. The reader is introduced to the new status quote in short order. Wood is able to pull you into this new world and make it seem very realistic. In addition to establishing the environment, he does a very good job with the characterization. The various characters seem like people you know. They might act differently than the average person in our world but that is only because of the situation. Living in a war zone forces the inhabitants to make choices. Wood is a writer I will be looking out for in the future. First up for me will be picking up the rest of the collections in this series.

Burchielli's art is a perfect fit for this type of story. He is good at drawing the various equipment and backgrounds. His helicopters are especially good. The people in the story do not look like carbon copies of each other. He manages to give each person a distinctive look.

View all my reviews
Posted by Jim Black at 5:10 AM 1 comment: