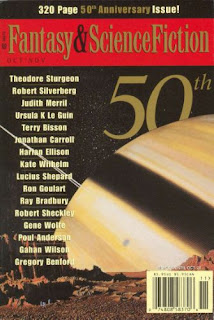 
One thing I can say is that Gene Wolfe's short fiction is always interesting.  "A Fish Story" is a short work that leaves you wondering what really happened.  Like most Wolfe stories, the narrator may be unreliable.  While this is a lesser work, it is still worth reading.  Wolfe is one of the current masters of the short form.  I need to read some of his novel length work to see if I like this style in a long form.


The magazine this appeared in was the 50th anniversary issue of the Magazine of Fantasy and Science Fiction.  They always were able to stack the deck for the anniversary issues.  In addition to this story, other authors featured here were Ursula K. LeGuin, Ray Bradbury, Harlan Ellison, Ron Goulart, Robert Silverberg, Theodore Sturgeon, Poul Anderson, Robert Sheckley, Howard Waldrop,  Kate Wilhelm, Lucius Shepard, and others.