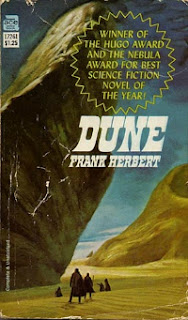 Carl (at Stainless Steel Droppings) has put Dune on his reading list each year.  And every year he has not read it.  This year he is involved with a group reading of the book over a three week period.  I was considering re-reading this classic and thought it was a good time to join in.  Each week I, and many others who have joined in, will answer questions about that week's section.


If you have not read the book be aware that the questions and answers will contain spoilers.

1.  Did you see anything in this first section of the book that either you hadn't seen before or that you had forgotten about, anything that stood out to you?
The thing that stood out most was the timelessness of Herbert's writing.  I have read this novel in the past and loved it.  It is one of my all time favorite books.  One of my fears in returning to it was that it would not hold up to the passage of time.  I was afraid that the storytelling would seem dated.  Herbert captured my attention with the opening pages.  Although the story contains a lot of dialogue and introspective thoughts, the combination of intrigue and short chapters keep the story moving at a rapid pace.
The thing that I forgot was the way Herbert keeps the Baron just out of sight. He always seems to be in the shadows.  This makes him more menacing.
2.  What did you think about the plot device of the early revelation that Yueh was to be the traitor?
I thought Herbert made a huge mistake in revealing that Yueh was the traitor at the beginning.  Surely it would be more suspenseful not knowing who was the traitor.  I have to give him credit.  It is like the one episode of the television show "How I Met Your Mother".  Two of the characters (Barney and Marshall) have a "slap bet".  Marshall will get to slap Barney whenever he wants.  He feels bad for two of the other characters (Ted and Robin) and gives the slap to them.  The whole show revolves around the slap being passed back and forth.  Barney almost goes off the deep end because he does not know who will slap him.  It is similar in this story.  In "Dune" we know Yueh is the traitor but the rest of the cast does not.  They know that a traitor is in their midst.  The suspense is in watching the Atreides try to solve the mystery.  In the end I had to admit that this was a great twist to the plot.
3. What was your favorite part of this first section? Which character(s) do you find most interesting and why?
Like Carl, my favorite scene in the first section was the dinner.  I really enjoy reading the various discussions that took place in this part.
Paul is my favorite character in part one.  The mixture of suspecting that he is special while still being a not quite adult makes for a very interesting character.  He is obviously gifted in many ways.  The way his training kicks in when the death trap is sprung in his new bedroom shows that he is not an average boy his age.
4. Did the revelation about the Harkonnen surprise you?
The first time I read that Lady Jessica was the Baron's daughter I was stunned.  This time I knew it was coming.  Herbert set up a classic twist with this revelation.
5. Finally, please share some overall thoughts on this first section of the book. Are you finding it difficult to follow? Easy to understand? Engaging? Boring? Just share what you are thinking thus far.
The first section reinforces my opinion of the book.  Herbert is a master at writing a scene that is full of dialogue and thoughts but keeps you reading at a furious pace.  I think that the short chapters and changing viewpoints help to keep the story moving.  I cannot wait to get to the next part of the story.  This is a rare case of a long story that seems to be fast paced.  It never seemed like I had read for very long until I looked at the clock and realized that I had read more than I thought.
Posted by Jim Black at 1:36 AM

Hi Jim! I'm glad you are enjoying the work once again. I am also finding that it is hard to put down. Yesterday afternoon I read most of the second part.

I like your observation that keeping the baron hidden makes him scarier. I hadn't thought of that. But it makes sense.

I'm so happy you're enjoying, Dune is one of my favorite books too. I too, was a little worried that it wouldn't stand the test of time, but I find that, as usual, I enjoy it more and more every time I read it.

the Baron is so creepy!

Herbert's writing is great. I love how he puts dialog together, because what is said is always of equal importance as to what is not said. I can't wait to discuss the next section, I'm already putting my questions together.

I'm pretty excited to see your questions and to discuss the next section.

Great post! I know that other people have mentioned it, but I really like how you mentioned that not seeing much of the Baron does more to build him up than actually seeing him would.

Great! Was hoping your post would pop up soon. I am so glad you are re-reading this with us. I always enjoy your thoughts on the classics. You always seem to approach them with an attitude that I admire and find some kinship in.

I am so glad that this held up for you. That is always the risk with re-reading (or even reading for the first time) work that was written decades ago. I think that risk is more present with science fiction where dated ideas can crop up so easily.

The introspective thoughts/conversations is one of the things I am really enjoying in Herbert's writing. I like knowing what the characters are thinking, especially when I as a reader know that some of what they are thinking isn't right. It sets up a level of tension that makes me want to keep turning the pages. I also like the short chapters and various viewpoints as well as the insights and tempting morsels present in the various writings of Princess Irulan.

Fantastic "How I Met Your Mother" comparison! I love the slap episodes and it is an apt comparison, where you and certain characters know something bad is coming but you are not sure when so that suspense just builds.

I am enjoying the pacing of the story as well and am thrilled to find that, for me personally, this novel is proving well worth the wait.

I can't say that I have been all that fond of Paul in this first part. Yeuh intrigued me the most. But, as I'm reading part two, I'm becoming more interested in Paul's character.