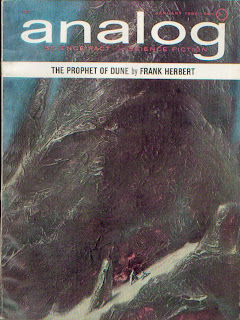 In addition to the answers to questions about the third section of the classic science fiction novel-Dune-I decided to include images of some of the covers you do not normally see for the book.  The Analog cover for "The Prophet of Dune" count.  This was the second half of the magazine serialization of the novel.


On Monday, I will be posting a look back at the group read and my overall review of the book.


To read the answers of other members of the group read click here Stainless Steel Droppings. 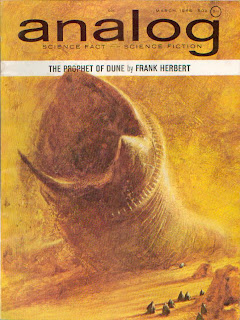 1.  What was your reaction to finally learning the identity of Princess Irulan?  Do you think that her convention added to the story?  I was very surprised the first time I read this book back in the 1970s.  The excerpts from her writings were helpful at filling in information that you might miss out on.  It is interesting to see how the survivors look back at their leaders after a war.  If the Emperor had managed to stop Paul, the histories by Princess Irulan would have revealed a drastically different story. 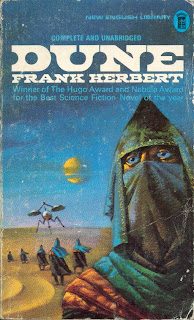 2.  Where you satisfied with the ending?  I liked the ending.  Herbert had to have Paul succeed after the epic battle.  I thought it was an interesting twist that Paul could not see his death in his visions of the possible futures.  Because of this vision blindness, the reader was not sure if Paul would survive the end of the book.  It was obvious that Paul's plans would succeed whether or not he lived.  It reminds me of the account in the Bible where the disciple Paul was threatened with death for preaching his message.  He said if he died, he would get to go live with his savior.  If they left him live, he would continue to preach.  Either option was a victory.  Paul Atreides plans would be implemented either way.  So in this respect, and in addition to having the same name, this paralleled the disciple Paul. 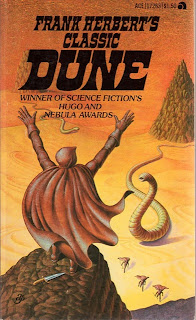 3.  On both Arrakis and Salusa Secundus, ecology plays a major role in shaping both characters and the story itself.  Was this convincing?  Do you think that Paul would have gone through with his threat to destroy the spice, knowing what it would mean for Arrakis?  I think that the ecology and it's effect on the natives was one of the best developed parts of the background.  Herbert convinced me.  If necessary Paul would have destroyed the spice.  I believe that he would have kept a secret source in the heart of the desert that only the Fremen could access.  I also think that he knew the Guild would never risk the loss of the spice.  Paul was very safe in threatening to destroy the spice. 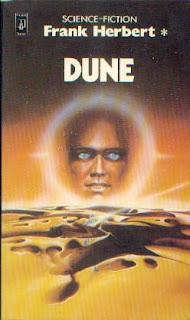 4.  Both Leto and Paul made their decisions on marriage for political reasons.  Do you agree with their choices?  As a reader, you want to see the Paul and Chani get married.  At different times it seemed that you wanted Jessica to marry Leto.  Unfortunately, royalty does not always have this option.  At least in the world of "Dune", the concubine seemed like the actual wife while the wife was just a political pawn.  Paul had to marry Irulan to be able to lay claim to the throne and take control of the Great Houses.  While I might not agree with their choices, Paul and Leto made the only realistic choices available to them. 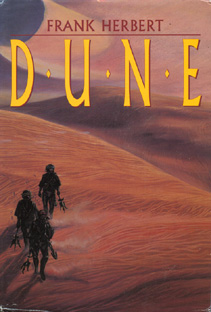 5.  What was your favorite part in this section of the book?  This is possibly the hardest question to answer.  I will go with the action spectacular answer.  I favorite, at this time, was the section where the Fremen stormed the Emperor's stronghold on the backs of the worms.  It is always fun to see the over-cocky Sardaukar realize that they are hopelessly overmatched.  It is similar to the end of "Star Wars" when the Death Star is taken down.

6.  One of the things I noticed in the discussions last week was Herbert's use of the word "jihad".  What do you think of Herbert's message about religion and politics?  Not everyone will agree with me but I thought Herbert created the best blending of political intrigue, religion, ecology, and classic hero myth possible.  This is one of the very few novels that was considered a classic when it first appeared and is still on the classic list 51 years later.  The addition of the religious aspect gave greater depth to what could have a traditional science fiction adventure novel.

" If the Emperor had managed to stop Paul, the histories by Princess Irulan would have revealed a drastically different story."

I hadn't thought about that but you are indeed right.

Great comparison with Paul in the Bible and Paul Atriedes. In the New Testament Paul says, "but for me to live is Christ and to die is gain". He did indeed see both as options for success. If he lived he would get to go on preaching the gospel of Christ. If he died he would go to be with his Savior. A true win-win situation. That is one aspect the films didn't even come close to capturing, that powerful moment when Paul realizes that regardless of the personal outcome that the events he set in motion would continue on. I can't help but think this was foreshadowed to a degree with Liet-Kynes. As he lay dying, conversing with his father, the realization comes that the seeds he had sewn on Arrakis would continue due to the passion and devotion of the Fremen, who had adopted this message and had woven it into their belief system.

What I have most enjoyed about this group read is that it has caused me to examine Dune in a much deeper and more thorough manner than I would have had I been reading it on my own. If I was reading it myself I would have enjoyed it for the story being told but never dug deeper, because I just don't read for entertainment that way. In reading everyone's thoughts and formulating my responses it has opened my eyes (and continues to do so) to just what an amazing feat Frank Herbert accomplished with Dune.

And thanks for including all the covers, that was fun.

I agree that Herbert's use of ecology was successful. I really enjoyed how the ecology not only played a pivotal role in the novel, but how it also at times ran the whole show.

Thanks for showing the covers. It's always fun to see all the different versions.

I'm so thrilled to see these covers, I really like them. It always fascinates me to see different book covers or movie posters.
I liked that part about the Sardaukar as well. It's always great when people are so full of themsleves and they find someone who does things better. It was a great moment.
I do agree, that Paul and Leto had not much of a choice but personally I found it painful to imagine something like what happened to Chani would happen to someone.

The Sardaukar part was very interesting. It would behoove all of us to remember that there is always someone out there that will do our job better. It's best not to be over-confident! The Sardaukar needed to learn a little humility.

Yes, and Paul and the Fremen certainly taught them some humility!

I was so happy when they did!

I hadn't really considered what would have happened with Irulan if she hadn't married Paul. I did get the impression from Irulan's writings though that she and Paul were pretty close.

I also love the covers, especially the magazine. I'm always a little jealous of those who experienced anything serialized first-hand, whether it be Dickens or something like this. How exciting it would have been to wait for each part (although in this case was it just the two parts?)
Interesting thought about the histories if the emporer had won. "The victor writes the history."
I liked the ending, but wasn't satisfied. I'm ready to read more.
Interesting comparison to Paul in the Bible. I think all who were invested in the development of Arrakis felt the same way since they knew it was going to take hundreds of years to make it into a paradise. They were all willing to do their part even though they wouldn't see the outcome. That takes a lot of faith.
It was very satisfying whenever the Sardaukar bit the dust!

Thanks for these wonderful covers! Like you I think that Herbert to the best elements from human history, cultural, political, religious and combined them with a new ecological understanding to create his "classic" scifi novel. I was amazed at how well it stood up since my first reading.

The Dune book I read in Analog was "Children of Dune". It was serialized in 4 parts in 1976.

"Dune" originally appeared in 2 parts. The first section was called "Dune World" and was serialized in 3 parts in 1963-1964. The rest was published in 1965 in 5 parts. All of the serials were in Analog. So from Dec. of 1963 through May of 1965 eight of the issues contained chapters of "Dune". Some of the other writers who were published in these issues were John Brunner, Christopher Anvil, and Randall Garrett. It was a good time to read the sf magazines.

Shelly: I have often felt that same way about serialized stories that are later collected as novels. Although I am happy with the age I currently am, I still think wistfully about what it must have been like to read Asimov's or Heinlein's work in a serialized format, or Robert E. Howard's work in the pulps, or, as you mentioned, Dickens.

I would have loved to have Dickens as the new chapters were released. I learned recently that when Dickens would release one segment he would listen to his readers and would change parts of the story in order to please his readers. I think it was Oliver Twist where in the beginning of the story some of his characterizations (I think it was Fagin) were seen by many as antisemitic and he ended up toning it down.